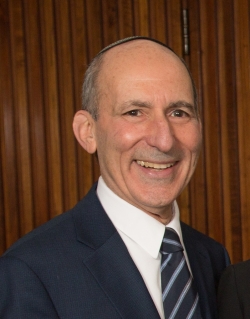 Dr. Gil Graff has served as Executive Director of BJE since 1993.  He is animated by the conviction that Jewish education is an enduring source of meaning, enriching the lives of those who experience it and enabling them to bring valuable perspective to building better communities.  Gil, who has been a teacher, school administrator and camp director, takes a broad view of Jewish education and is inspired by the diverse settings of Jewish learning and experience to which BJE relates, and the opportunity of working with educators and lay leaders from all streams of Jewish life.

Gil studied education as an undergraduate and, while working as a teacher and administrator at Jewish day and supplementary schools, earned a Masters degree in educational administration (CSUN), a law degree (UCLA School of Law), and a PhD in Jewish history (UCLA).  A native of Los Angeles, Graff joined the BJE staff as Assistant Director, in 1985, after serving as Director of Camp Ramah in New England.  Gil finds great satisfaction in working with BJE staff and board leadership, in partnership with others, to identify and implement strategies to better meet constantly evolving Jewish educational needs.

For example, as summer Israel trips became ever more numerous in the 1990s, BJE sunset its pioneer Summer Ulpan-in-Israel program for teens, and now conducts BJE March of the Living, leading the largest teen group (with 200+ high school seniors, each year) of any city in the United States participating in International March of the Living.  While, in the closing decades of the twentieth century, BJE’s work with Jewish day schools focused largely on curriculum development and personnel credentialing, BJE has, in more recent years, turned its attention to encouraging, supporting and incentivizing day school endowment development, helping schools access government services to strengthen student learning, and facilitating communities of practice for such groups as Heads of School, admissions directors, development directors, and cohorts of educators from a variety of disciplines.  Similarly, BJE’s work in support of early childhood and part-time Jewish education has evolved, with BJE playing a vital role in building educator networks, disseminating best practice, and providing opportunities for professional growth.

Gil is the author of three books and numerous articles on issues of Jewish education, history, and law.  He is particularly interested in the encounter of Jews and Judaism with modernity.  He has taught graduate and professional school students as an adjunct faculty member at American Jewish University, Hebrew Union College, Touro College, Spertus Institute, and the Academy for the Jewish Religion.  Among his many fellowships and honors, Dr. Graff has been a California Senate Fellow, a Jerusalem Fellow, and a Visiting Scholar at the Oxford Centre for Hebrew and Jewish Studies.  He currently serves on the board of the California Association of Private School Organizations and on the Board of Visitors of Loyola-Marymount University’s School of Education.

Gil and his wife Robin, also a Jewish educator, are the parents of two sons and a daughter who, as their parents, benefitted from attending BJE-affiliated schools.  Ari and Ilan practice law; Talia serves as Director of Programs at the Shalom Hartman Institute of North America.  The elder of the Graffs’ grandchildren is delighted each day with his learning experiences at a Jewish pre-school; his younger brother looks forward to similar opportunities.

"Reflections on Jewish Education in the Writings of Eliezer Berkovits." Australian Journal of Jewish Studies Volume 32 (2019): 89-104.

"Toward an Appreciation of the American Legacy of Rabbi Esriel Hildesheimer: The U.S. Rabbinate of Three Hildesheimer Students." Modern Judaism, Spring, 2011: 167-188.

“From Jerusalem to Brunswick: The Metamorphosis of Dina de-Malkhuta Dina” (Hebrew). Bitzaron, Spring, 1986: 59-63.