Of Humility and Multiple Voices 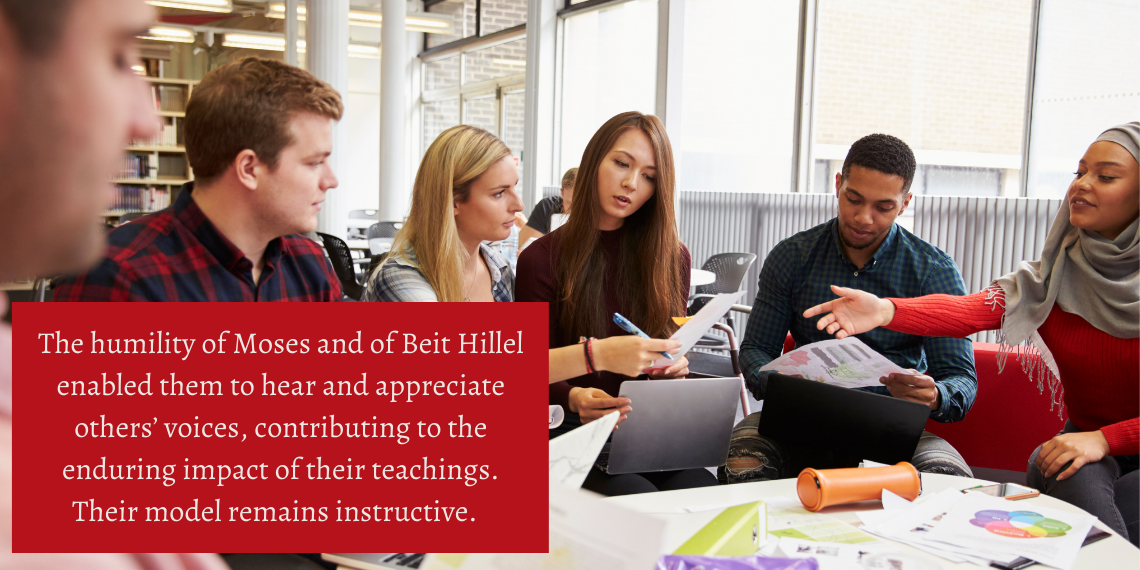 Of Humility and Multiple Voices

Moses, whose orations are the substance of the Book of Deuteronomy which, in the cycle of Torah study, Jews around the world are reading during the summer months, is described in the Torah as “exceedingly humble, more than any person on the face of the earth.”  The instances in which Moses’s humility is evidenced are legion, but the Biblical comment on his humility follows a chapter (Numbers 11) in which two men, Eldad and Medad, prophesy in the camp of the Israelites.  Appalled at this, Joshua says to Moses: “incarcerate them!”  Moses replies: “Would that all the people of God were prophets.”

Moses, it seems, is open to others’ voices.  The episode of Eldad and Medad is itself part of a narrative in which, seventy elders of Israel are endowed with the capacity to join Moses in leading the Israelites, in response to Moses’s plaint that he cannot, alone, bear the burden of carrying the entire nation.  In like manner, Moses (earlier) readily accepted his father-in-law’s advice to distribute the judicial function among officials who would resolve matters within various groupings of Israelites, rather than bringing all issues to him.

Long after Moses, the Talmud chronicles innumerable discussions regarding the proper understanding and application of laws of the Torah.  Among the debates recorded, are disputes between the House of Hillel and the House of Shammai (i.e., followers of schools of thought grounded, respectively, in the interpretations and teachings of Hillel and Shammai).  Though both schools’ opinions are recorded, in nearly all cases, the legal arguments are, in practice, resolved in accordance with the rulings of Hillel.

This passage is especially remarkable, in light of contemporary practice.  All too often, we are interested only in hearing and reaffirming positions we already hold.  The choice of listening to this or that news channel or to read one or another journal is often driven by the desire to see the world exclusively through a particular lens.

The Talmud (Berakhot 28a) relates that a certain rabbi who was head of the Beit Midrash (the major House of Study at that time) imposed very rigorous standards on who could enter, significantly limiting participation.  At a certain point, that individual, Rabban Gamaliel, was ousted from leadership.  On that day, reports the Talmud, 400 stools were added to the study hall – i.e., 400 additional people were admitted.  There is, however, a dispute recorded in the Talmud; another opinion has it that 700 stools were added.

It seems odd that Talmudic authorities would quibble about the number of new seats added to the Beit Midrash.  I once heard an explanation, though, that strikes me as extremely insightful.  Perhaps there were 300 stools in the Beit Midrash, under the leadership of Rabban Gamaliel.  On the day of his ouster, 400 new seats were added.  One reporter observes: 400 new stools have been added.  The second reporter comments: there are 700 new stools.  In light of different perspectives and teachings that will be contributed by those newly admitted, those holding the “old” seats should also be viewed as new; hence, the account that there were 700 new stools.

Hearing an expanded set of voices might not necessarily cause a person to change her/his view, but it certainly gives pause for deeper reflection, and might raise questions one has not previously considered.  In an all too polarized world, hearing the “other” might enable a person to better understand conflicting views and, perhaps, learn something through the others’ lens that warrants attention.  The humility of Moses and of Beit Hillel enabled them to hear and appreciate others’ voices, contributing to the enduring impact of their teachings.  Their model remains instructive.

Nov 29, 2021
From the Maccabees to Modernity: Enduring Lessons